The Eyes of Tammy Faye Review: The film brings us close to the story of Bakkers.

The movie adaptation of Tammy Faye’s biography unravels the story of the creators of the world's largest religious broadcasting network and theme park.

by Viveka Massey
in Entertainment, Movie
30 0
0 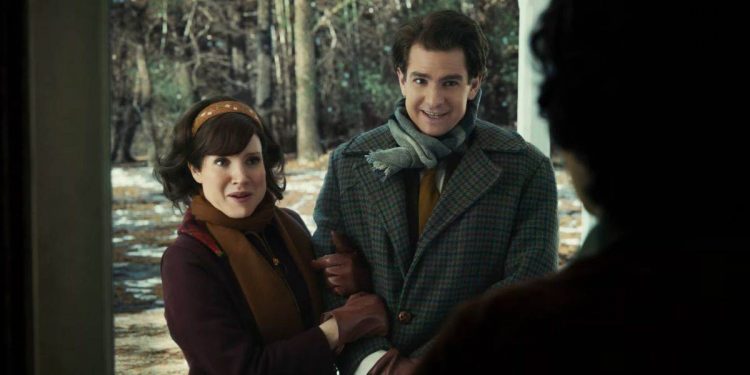 The Eyes of Tammy Faye is a biographical film based on the life of Tammy Faye. It is scripted by Abe Sylvia and is directed by Michael Showalter. Michael usually makes comedies movies like (“The Big Sick,” “The Lovebirds,” “Wet Hot American Summer”).

In the Eyes of Tammy Faye, Andrew Garfield and Jessica Chastain played the roles of a couple who were self-styled Christian TV personalities, Jim and Tammy Faye Bakker. They mould televangelism into a game-changing, culture shaking diversion.

The story is all about how Tammy Faye and Jim Bakker, two students at a Minneapolis Bible college, who are in their twenties, get together in 1960. This movie is a ticklishly fascinating and acclaimed 2000 documentary of Jim and Tammy Faye Bakker’s rise-and-fall saga. The couple created a Christian talk-show empire in the 1970s and 80s. But in the early ’90s, the couple was brought down by a string of financial and sexual scandals.

At school, Tammy Faye always wore makeup, and Jim preached the gospel. On a picnic date, they both confess their love and soon marry each other. As a result, they were expelled from the school.

The couple decided to start their church. They hosted a children’s show on Pat Robertson’s TV station. Tammy created and voiced the puppet that gave the show its appeal. She was the one who urged Jim to take on a show for adults and compete with Robertson. Soon Jim became a star, and Tammy used to be at home, then she asked Jim to start his TV station. Tammy resisted sitting and gossiping even after her newborn was born. Instead, she took place at the table with Jim, Pat, and another preacher, Jerry Falwell, and discussed business.

Check Out : No Time To Die Review: Daniel Craig perfect farewell to the role of 007.

Soon she and Jim became big TV stars with a vast following and a major financial empire to maintain. During the nineteen-eighties, when the height of the AIDS crisis was at the top, Tammy Faye courageously interviewed a gay Christian pastor named Steve Pieters who had AIDS. She asked her audience to walk on the path of acceptance and love.

After Tammy’s loveless and casual relationship with a record producer named Gary Paxton, Jim’s sexual indifference toward Tammy Faye frays their relationship. Jim forced her into humiliating on-air confessions and apologies. In the movie, Jim is accused of pursuing homosexual relationships before and after the couple’s marriage. He was also accused of rape by a church secretary named Jessica Hahn, and he gave money to her from the church’s coffers to keep silent. Jim also hired a prostitute in response to Tammy Faye’s ostensible.

In the conflict, Faye became addicted to prescription drugs, and she started behaving erratically. Yet, she helped Jim seal deals. In the drama, the personal beliefs and her persona have not been centred. Many questions are arising, and the answers to such questions are kept entirely out of the film.

Sex and politics are inseparably connected in The Eyes of Tammy Faye. Jim was accused of misusing the church funds and his involvement in a sex scandal.

In the movie, Showalter has not seen Tammy as a person. He sees her as a character in a media drama. He joined details from the script with actors and brought it to life. There is no connectivity of Tammy’s character with her youth and her life.