Sex and the City: The first look of the series reboot is out.

The popular tv show Sex and the City is coming back with the reboot of the series. The first look of the show is out. 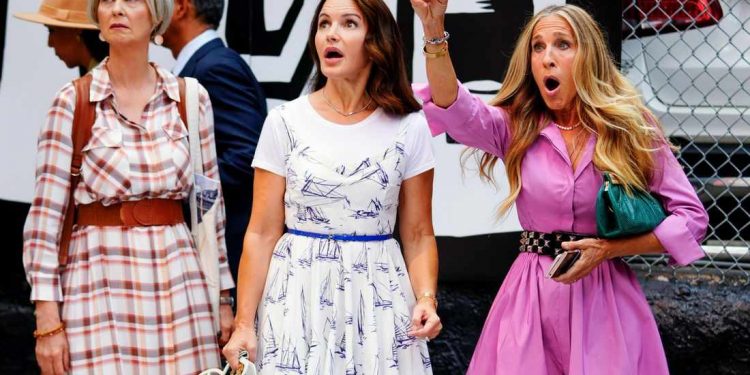 The rumours about the Sex and the City reboot turned out to be true. It has almost been 17 years since the original series was finally aired. On 9 July, the cast of the show shared the first look at the new show. According to a Deadline report, “The upcoming comeback will be focusing on Carrie, Miranda, and Charlotte. The show will cover their journey from the reality of life and friendship in their thirties to a more complicated reality of life in their fifties.”

The new 10-episode revival, titled- And Just Like That, is coming on to HBO Max. All the members of the original cast: Sarah Jessica Parker, Cynthia Nixon, and Kristin Davis, will be all back in the show. According to the reports, Kim Cattrall will not return as Samantha Jones. The release date of the series is not announced yet. On Monday, a promotional video clip of the show was shared on its Twitter handle.

Casey Bloys, president of programming in HBO, said- we are not trying to re-do Sex and the City. He further explained that the new story is about women living in their 50s, and they will deal with things people deal with in their 50s. The network is saying the women will relive their 30s. “Just as in real life, people come into your life, people leave,” he said while hinting at Samantha’s absence. He further said, “Old friendships fade away, and new friendships begin. So I think it is indicative of the real stages, the actual stages of life.”

Check Out : Netflix Announces the Premiere Date for Season 2 of “The Witcher”

Parker and her costars shared a clip featuring the scenes around New York City teasing the show in January. Parker channelled Carrie Bradshaw’s signature writing style in an Instagram video. Parker teased, “I could not help but wonder… where are they now?” Davis will return as Charlotte York, he wrote, “Anything is possible…Meet you there!” Nixon as (Miranda Hobbes), posted, “You, me, New York…anything is possible.”

HBO Max also shared the first official photo of ‘And Just Like That’ in July. The picture featured the leading trio, Cynthia Nixon as Miranda Hobbes, Sarah Jessica Parker as Carrie Bradshaw, Kristin Davis as Charlotte York. Nixon shared the photo on Instagram and wrote, “And just like that, it was day one!!”

Sarah Jessica Parker shared a picture with Cynthia Nixon and Kristin Davis, her costars from Sex and the City, on 11 June. After the read-through of the revival series. She wrote in the caption, “Together Again. 💜 Read through our first episodes @justlikethatmax. Alongside all the fellas and our newest cast members. Like an ice cream sundae. X, SJ.” Sarah Jessica Parker wrote on Instagram, “We have some new stories to tell. We are excited.”

Return of Mr Big and Aiden

Deadline confirmed that Mr Big will return to the Sex and the City reboot. Earlier, Page Six reported that Chris Noth would not return as Mr Big. Executive producer King said, “How could we ever do a new chapter of the Sex and the City story without our Mr Big?” In February, Chris Noth teased fans after the rumours broke. He said that he would not be a part of the revival. He joked to his fans and commented back, “Well, if Page Six says it… it must be true😉.”

Page Six also reported that David Eigenberg, who plays Steve Brady, will not be returning. But according to a report, David Eigenberg is in negotiations to make an appearance on the new show.

John Corbett confirmed in an interview that he will return as ex-fiance of Carrie, Aiden Shaw. “I am going to do the show. Returning to the role is very exciting,” he said. When Corbett was asked that in how many episodes fans can see Aiden. Corbett said, “I think I might be in quite a few.” He added, “I like all those people. They have been very nice to me.”

The COVID-19 pandemic will be a part of the play.

Parker revealed in an interview with Vanity Fair that COVID-19’s effect will be part of the storyline. It is because the characters are living in New York and Covid-19 affected the City a lot. Parker further said the writers will examine it and add it to the script, and I have faith in them.