Neha Kakkar will be seen on Kapil Sharma Show with her brother Tony Kakkar for promoting her new song Kanta Laga.

by Viveka Massey
in Entertainment
30 1
0 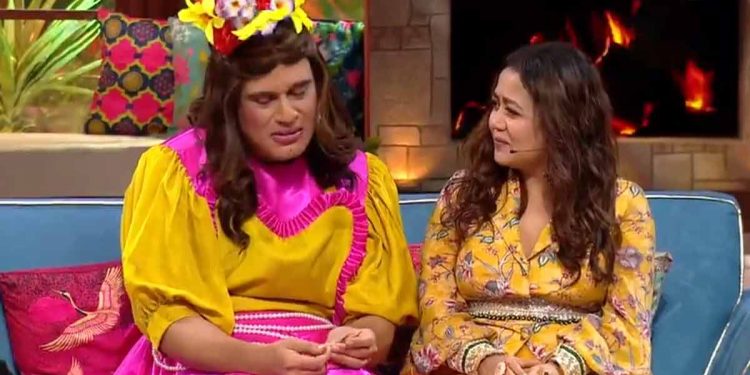 Sony shared a new promo in which Krushna is trolling Neha over crying on Indian Idol. Neha appears as a judge in Indian Idol. she always bursts into tears whenever someone tells their hardship and life stories or gives an emotional performance. Because of that, she became the fodder for many memes. In Kapil Sharma Show, Krushna also made fun of her and roasted her. She pretended like she was upset and said, “Maarungi (I will hit you).

Krushna is famous for his character Sapna. He came in, and firstly he welcomed Neha and called her a family. Then he quickly shifted his gears and started joking. He lamented, “Mereko na bohot dukh hai, mereko koi pyaar nahi karta hai (I am very sad because no one loves me).” Neha showed him sympathy and asked- why are you sad? Then he made fun of her tendency of crying on Indian Idol. He said, “Aap rona nahi, haan, main contestant nahi hoon (Don’t cry, I am not a contestant).”

Krushna also compared Neha and Kapil Sharma show’s judge Archana Puran Singh to each other. He called Neha the Archana of Indian Idol. He made jokes and said, “Archana earns money by laughing, and Neha earns money by crying.” Neha laughed and did not take it sourly.

Check Out : Samantha Ruth Prabhu and Naga Chaitanya’s reaction to the rumours about their split

Krushna shared a video with Neha. In the video, he is dancing with Neha on Kanta Laga song. He captioned the video as Fun on the sets with Neha Kakkar, Tony Kakkar, Kiku Sharda, Kapil Sharma. I have known Neha for a long time. It is always great to see you on the sets. Always rock, God, bless you.

Apart from Krushna, Kapil also teased Neha and Tony. In a promo shared by Sony Entertainment Television, Kapil asks Both of them, “you are all over the television in many shows. Is this because you got both Covid-19 vaccination doses or because you give a discount on package deals.”

Kapil teased Neha about her new song. He even mentioned the old Kanta laga song. He said, “Mera kum se kum nahi toh 20 baar angootha darwaze mein aake naakhun toota, mere se ek mukhda nahi bana (I have jammed my finger in the door at least 20 times, and broken my nail. But I could not put together a single verse).”

Indian Idol 12 winner Pawandeep Rajan along with other contestants Nihal Tauro, Shanmukhapriya, and Arunita Kanjilal are also a part of this episode.