Grahan, the new web series, starts beautifully, speaking and delivering to the audience about a family and a group of people surrounding them, who become unfortunate victims of the 1984 anti-Sikh riots. How it ends, is determined by the people watching it.

by Digi News Staff
in Entertainment
29 1
0 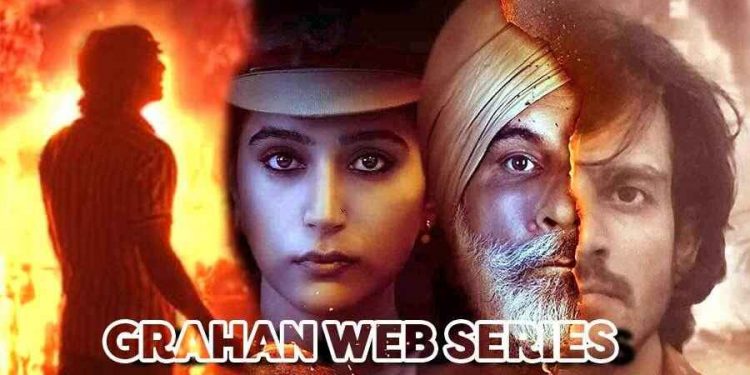 There isn’t a shortage of material in the form of books and movies, which gives us, practically, more than a glimpse of the different traumatic times in history, the majority of them being shown from the protagonists’ point of view. This way, the story gets a new angle as well where the sinking ship gets the twist of young love and a dictatorial regime becomes synonymous with a woman’s courage and strength. This way the people watching the historical movie, get to relate to how traumatising the experience is. While this is an amazing way of delivering the emotion, there lies the risk of trivialising the said event.

Grahan, the new web series, might have surrendered to this risk. It starts beautifully, speaking and delivering to the audience about a family and a group of people surrounding them, who become unfortunate victims of the 1984 anti-Sikh riots. The web series by the end, however, gets engulfed by the above-stated error and hence distracts the audience from what was, in the beginning, the main goal.

The show puts IPS officer Amrita Singh in the centre of the story, by connecting certain lines attached to her to the different vital parts of the story. It all starts with her desire to investigate the cause of the murder of a journalist but does not succeed in doing so because of resistance from her superiors. She is instead shifted to some other case by the CM, as the latter had his own goal of killing his rival. In the other scene, back in 1984, a young man is seen falling in love with a woman, but their love remains incomplete, because of the woman’s parents rejecting the pair. This man is later seen taking part in riots. All these scenes are indirectly connected to Amrita, without even her realising it.

Grahan delivers different angles to the riots and talks about different controversial issues. It gives a view of communal politics while connecting it with present scenarios. It also shows the mystery behind a father keeping an important secret from his daughter. The show also focuses on the cases of police corruption and also gives a glimpse about how media is maybe, not entirely free. In the middle of it are hints of casteism and Islamophobia. The show has tried to capture a lot of problems prevailing in the society and while the effort is seen, maybe it hasn’t succeeded in maintaining its initial goal.

There are so many connections, that the players who should have gotten much more focus, were ignored. Also, the strings being attached to Amrita were convenient. Things seemed to just sort out in her hand. The show delivers that we are so blinded by what riots will achieve in the end, that we often forget about the people who get affected in the process. The important characters were flushed out, and the only person who got saved from the Sikh family that was affected, was Manu, but she was also related to the show’s protagonists. This, unconsciously, trivialises the event itself.

However, setting aside these shortcomings, the show does stand up to its name. It is by no means boring, as is evident by the number of happenings taking place. It does play its hands quickly,  but it also saves some juicy parts to surprise the audience. The show and its scenes hold the audience’s attention and while it did lose its focus of the initially set aim, it does deliver different messages and meanings. Each episode of this series starts with a mystery and ends with a cliffhanger, with plenty of fillers disclosed in between to quench the audience’s thirst.

Coming to the performance put forward by the actors, Pavan Malhotra has outshined everyone else. He plays his role with mind-blowing vulnerability, despite his character having the twist of shades of grey. Zoya Hussain has, however, performed better, and her role in this show isn’t the best. The problem of this seems to lie with the director, Anshuman Pushkar who displays his range in the series.

To summarise, Grahan is not a series that is to be skipped. Yes, it does have its drawbacks, but the show does deliver a lot of interesting scene to the audience. It holds what is expected from a historical story series, and the audience will hence not leave disappointed. It is not one of the path-breaking series, but it is watchable and will give the ones watching it, sufficient amount of nail-biting and adrenaline flows.