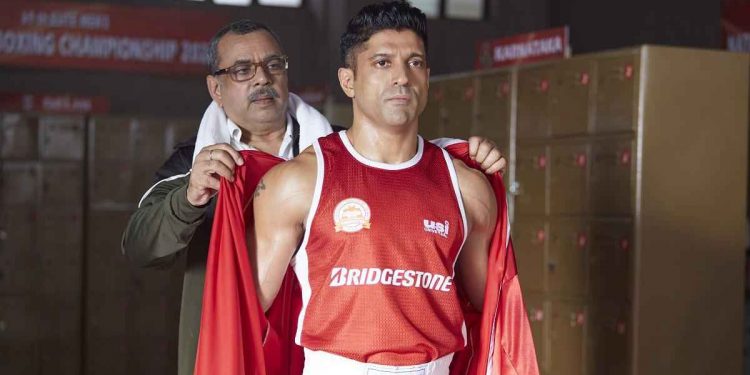 The recently released movie Toofan, starring Farhan Akhtar, was a tagged cliche consisting of dramatic lines and lacking the soul and desired swag. All in all, the movie did not stand up to its audience’s expectations.

With his latest Amazon Prime Toofan, Rakeysh Omprakash Mehra enters the sports world for the second time. While Farhan Akhtar starred as the famed Olympic runner in his 2013 film Bhaag Milkha Bhaag, the director’s Toofan takes to the boxing ring. Nana Prabhu (Paresh Rawal), the master instructor, advises Aziz Ali (a guy with incredible energy and extraordinary speed but abysmally deficient in technique) that he must consider the ring as his home in an early scene.

Toofaan was billed as a heartwarming action flick. It was maybe made to emulate the popularity of another Farhan film, the flawless Gully Boy. At least, that’s what the soft-focus, foggy shots (shot by Gully Boy DP Jay Oza) suggest. However, it’s an uninteresting and boring combination of dramatic lines with no emotional weight, story lines that have been seen a thousand times before, and characters that fail to connect. With films like Rang De Basanti, Bhaag Milkha Bhaag, and Delhi-6, Rakeysh Omprakash Mehra nailed what it’s like to be young in an unfair society.

Ali (Akhtar) is a criminal from the Mumbai neighbourhood of Dongri who engages in harassment and debt collection, often using violent force, but believes that boxing may help him become a more powerful thug in an unusual turn of events. He travels to Prabhu, who is first hesitant to teach Ali, owing to the fact that he is a Dongri Muslim. However, the coach ultimately gives in. Prabhu’s hatred for the group originates from the loss of his young wife in a terrorist assault, which left his little daughter Ananya unharmed. Despite his longtime drinking friend Vinay (Mohan Agashe) emphasising time and time again that this cannot be true, he stubbornly thinks that all Muslims are terrorists.

Years down the line, Ananya (Mrunal Thakur), now a doctor working in a charity hospital for the poor and destitute, has a dramatic meeting with Ali when he walks in with a head wound. She kicks him out after learning that he was involved in a scuffle.

Toofan is sometimes inane and formulaic, with Ali winning boxing bout after boxing fight and finally capturing Ananya’s sight and heart. Although a second completely unexpected tragedy appears unnecessary and claimed to have been designed just to harden Prabhu’s  stubborn attitude, it does not require a Sherlock Holmes to predict where the narrative would end up.

Mehra, on the other hand, has put together a fantastic cast. First as the Dongri ‘Dada,’ then as a mellowed lover, husband, and father, Akhtar is extraordinary. His journey of self-discovery is enthralling. Rawal and Agashe play their parts with excellent conviction, while Thakur is lovely as a cheerful girl spreading her contagious grin and happy glow. Aside from that, Toofan lacks the ferocity that one would expect from a work about boxing.