The movie is an investigative horror thriller, and while the movie shows off a style with an interesting narrative style, the movie’s pro points might just end there. To know more, read ahead. 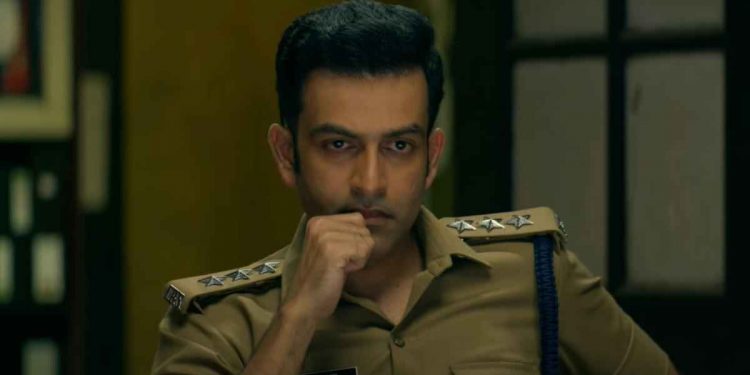 The Malayalam movie which just released on Amazon Prime comes with two firsts. These two firsts include Tanu Balak’s debut directorial outing and Prithviraj Sukumaran’s maiden OTT appearance. The movie is an investigative horror thriller, and while the movie shows off a style with an interesting narrative style, the movie’s pro points might just end there. The story is told through two parallel threads and has a storyline that has intriguing police procedural and a paranormal thriller at the same time. All in all, the film doesn’t quite make a solid impact.

The story so starts with a skull being found wrapped in a trash bag is found in a local fisherman’s net, which then becomes the headlines of primetime news. As expected, Prithviraj enters here, as Assistant Commissioner of Police Sathyajith and is called to investigate this case. The movie then proceeds to disclose clues, the first one coming from the Forensics, who claim that the skull must be from someone who was murdered at least a year ago and whose identity is still unknown. With this, Sathyajith understands that connecting the two will give him leads and puts together his team to discover the identity of the victim and their killer, we are introduced to Medha (Aditi Balan), an investigative journalist, who moves into a new home in the city with her young daughter. This is when Medha starts feeling like something invisible is always close to her at home. The two stories then connect here and the gear is started.

While the side of the story that deals with the investigative murder mystery works well, it fails to do the same for the parallel soul seeking revenge story. The connection is somewhere lost between the two-story and everything just does not work out efficiently. The story on paper may actually sound amazing, however, when acted out, it loses the wow factor. In the end, the audience wasn’t hooked by the execution.  It would’ve made sense if the film was either an investigative thriller or a supernatural thriller. The attempt at merging the two genres just complicated the entire story, making it not as entertaining as it could be. It should also be noted, that even though the movie was trying to merge the two stories, Prithviraj’s character somehow got more attention. Sathyajith ends up cracking most of the case and there’s very little left for Medha to do. In the end, Medha’s side of the story hardly makes any impact and leaves one scratching their head.

Apart from the story, Prithviraj did well in his role as the ACP, though his performance does remain one-note. However, we cannot get judgemental at this, as this side of the character might just be a deliberate attempt. He was last seen in Ayyappanum Koshiyum, and it’s a film that brought out the best in him through a fiery performance.

Coming to Aditi Balan, her performance was by far very confusing. She also looked clueless for the most part. After her standout performances in Tamil films Aruvi and Kutty Story, she looks lost in a role she hardly impresses in. Unlike most thrillers about a killer, Cold Case did take the road less taken with the identity of the murderer. However, this experiment did not work great for her and her role was after all written poorly. This was another disappointment.