Bhoot Police got mixed reviews from the audience and critics. However, Saif Ali Khan is getting praise for his performance in the film. 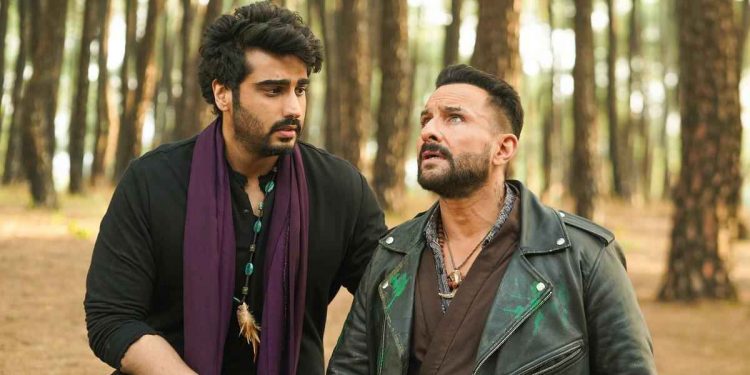 Horror-comedy has emerged as a famous genre in Bollywood over time. In the past few years, various movies have been made with this theme, for example – Stree, Roohi, Laxmi, etc. Now, another name is added to the list with the latest release Bhoot Police. Saif Ali Khan and Arjun Kapoor starer film started streaming on Disney+Hotstar from 10 September-2021.

Directed by Pavan Kirpalani, Bhoot Police is the latest addition to the horror-comedy genre of Bollywood. The plot of the film revolves around two brothers who work as experts in paranormal activities. That lead the two brothers to the task of capturing a demon. The movie is amusing and has surprising emotional moments. There are scenes that the director has taken from movies like Evil Dead, Ghostbusters, Zombieland, and The Exorcist. However, the biggest inspiration for the film is the famous cartoon Scooby doo. As Scooby gang, both brothers Chiraunji and Vibhooti drive around in a Mystery Machine-Esque van. They meet with two sisters, Maya and Kanika (Yami Gautam and Jacqueline Fernandez), and make a group to capture the demon.

The first half of the movie has amusing moments, but the second half lifts the film. The landing of the punch lines in the second half is better than the first one. Saif Ali Khan and Arjun Kapoor smartly played their characters. However, they seemed too urban to play the roles, and somehow their accent betrays them. Yami Gautam brings a certain stability to her role and tries her best, but she could have done a little more. As for Jacqueline Fernandez, her part is hard to put in a decent performance. While every role has issues, only one character, played by Jonny Lever’s daughter Jamie Lever’s left a mark. Her performance in a supporting role was excellent, and the audience loved her part.

Check Out : Review of The Forever Purge

The movie has good VFX, which is a rare thing in Bollywood. Apart from that, Sachin-Jigar’s background score and Jaya Krishna Gummadi’s cinematography helped the whole narration. The film over-relied on genre clichés, everything, from projectile vomit and wall-crawling ghouls, to a creepy kid and a haunted forest. The jokes and slapstick moments in the movie could have been better, and it would have been beneficial for more spooks and chills. The best part of the movie is how the troop tries to make a horror-comedy almost seem like a desi drama. However, like the jokes in the first half, it could have been better.

The film has a spooky vibe and innocuous-fun feel that made the movie a decent one-time watch.