After Vijay Rupani stepped down, Bhupendra Patel to be the 17th Chief Minister of Gujarat.

Bhupendra Patel to take oath today as the 17th Chief Minister of Gujrat. He will replace Vijay Rupani as CM Vijay stepped down from the top post. 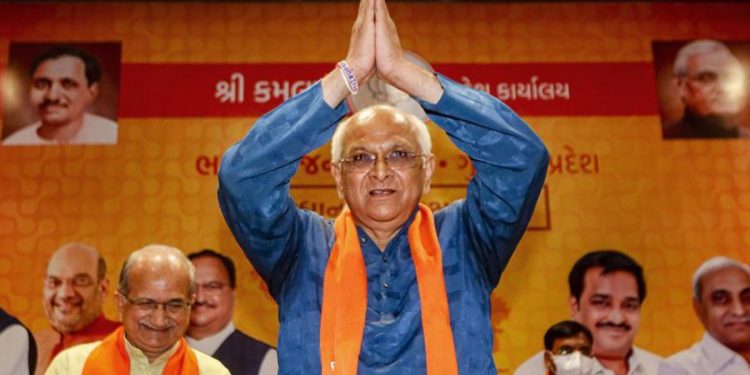 After stepping down from the designation of Chief Minister of Gujarat, Vijay Rupani suggested the name of Bhupendra Patel for the position in the Legislature meeting of the party. The meeting was held in Gandhinagar on Sunday. Vijay Rupani resigned from the designation on Saturday. One day after, Bhupendra Patel is decided to be the next Chief Minister of Gujrat.

Bhupendra Patel was born on July 15, 1962, in Ahmedabad. He is a builder by profession and owns a diploma in civil engineering.

Bhupendra Patel was a former Ahmedabad city councillor. He was also the chairman of the Standing Committee of the Ahmedabad Municipal Corporation and the Ahmedabad Urban Development Authority (AUDA). He is also a trustee of the Patidar organization Sardar Dham and Vishwa Umiya Foundation. In 2017, Patel defeated Congress candidate Shashikant Patel and won his seat by over 117,000 votes.

Bhupendra Patel will take oath at 2.20 pm today. Governor of Gujrat Acharya Devvrat invited him to take the oath. At the legislative party meeting, Patel was picked as a replacement for Vijay Rupani. The meeting was held in Gandhinagar on September 12. On Sunday, Patel met the Governor at Raj Bhavan in Gandhinagar and staked a claim in the top post. His predecessor and a delegation of BJP leaders, Vijay Rupani, accompanied him.

The Governor tweeted – The newly appointed leader of the Bharatiya Janata Party Legislature, Bhupendrabhai Patel, presented a proposal to form a new government under his leadership at the Raj Bhavan. Accepting the proposal, he was invited to take oath as the Chief Minister on September 13, 2021, at 2:20 pm.

On Sunday, Amit Shah tweeted, “I believe that under the guidance of Narendra Modi, sustainable development of the state will keep up its momentum.” According to the news agency ANI, Union home minister Amit Shah will be attending the swearing-in ceremony of Bhupendra Patel in Gandhinagar.