Ranvir Singh starer film 83 got its new release date. The film was scheduled to release on 10 April-2020 but got delayed due to the Covid-19. 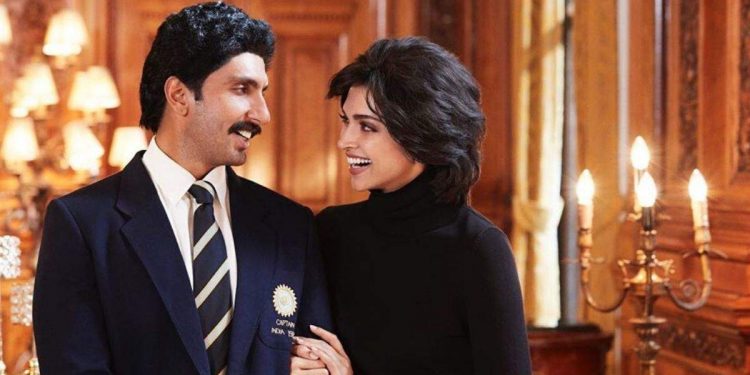 Finally, the wait for sports biographical film 83 will be over in few months. The new release date for the film has been announced, and it is only a few months away. The fans have been waiting for this film for a long time, and the Covid-19 made them wait much longer. The film was scheduled to release on 10 April-2020 initially.

83 is a sports biographical drama directed by Kabir Khan and produced by Kabir, Vishnuvardhan Induri, Deepika Padukone, and Sajid Nadiadwala. It is a story of ICC Cricket World Cup 1983, the tournament responsible for turning cricket into a religion in India. The 1983 Cricket World Cup was held in England and Wales from 9 to 25 June-1983. Eight countries from around the world participated in the tournament, and India came out victorious. The film will cover the journey of the Indian Cricket Team of 1983.

The shooting of the film was done in England, and it was completed within three months. Ranveer Singh will be seen in the lead role of the legendary allrounder Kapil Dev. Kapil Dev led the Indian Cricket Team in the 1983 World Cup to the victory.

The film was first scheduled to be released in theatres on 10 April 2020, but it was delayed due to Covid-19. The film was rescheduled multiple times, but due to the covid-19 Pandemic, it kept on delaying. Luckily fans would not have to wait much because 83 will be releasing in theatres this Christmas (25 December 2021).

Ranveer wrote on Instagram- It is time……….. 🏏🏆 83 IN CINEMAS THIS CHRISTMAS. Releasing in Hindi, Tamil, Telugu, Kannada, and Malayalam. #ThisIs83. The star also shared the news with his fans on his Twitter handle.

This announcement delighted the fans and has increased their excitement to another level. After hearing the news, actress Huma Qureshi commented, “Yaaaayyyyy finally.” Fans from all over India are commenting on the post and showing their excitement. One fan wrote, “Eagerly waiting for Christmas now.” Another one wrote, “can’t wait for it.”

Maharashtra Government announced that theatres in the state will be reopened on 22 October. And a day after that, the filmmakers of 83 decided to release the film on Christmas. The 1983 World Cup Win is still a historical moment for India. Cricketers are the real superstars for most Indians. So the filmmakers thought of releasing the movie in 5 different languages, Hindi, Tamil, Telugu, Kannada, and Malayalam.